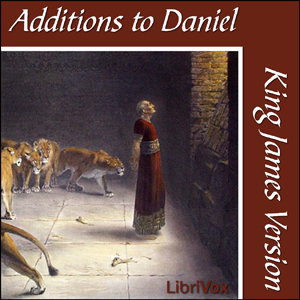 Librivox recording of Additions to Daniel, King James Version. Read by David Shamp The Additions to Daniel comprise three chapters not found in the Hebrew/Aramaic text of Daniel. The text of these chapters is found in the Greek Septuagint and in the earlier Old Greek translation. They are accepted as canonical and translated as such in Roman Catholic, Eastern Orthodox and Oriental Orthodox Bibles. They are listed in Article VI of the Thirty-Nine Articles of the Church of England. However, most Protestant versions exclude these passages as apocryphal, retaining only the text available today in the Hebrew/Aramaic manuscripts. The additions are: * The Prayer of Azariah and Song of the Three Holy Children : after Daniel 3:23, incorporates the Fiery Furnace episode. * Susanna and the Elders : before Daniel 1:1, a prologue in early Greek manuscripts; chapter 13 in the Vulgate. * Bel and the Dragon : after Daniel 12:13 in Greek, an epilogue; chapter 14 in the Vulgate. Bel and the Dragon is the supposed story of Daniel and his struggle with Cyrus King of Persia and his idolatrous people. It is considered a deuterocanonical book by some Christians and Apocryphal by others. The story covers two events, the reckoning of the falsity of Bel (a Babylonian idol) and a Dragon whom the Babylonians worshiped; along with Daniel’s being thrown in a lion’s den, and his deliverance. The History of The Destruction of Bel and the Dragon is read from the Holy Bible, King James Version 1611 which includes the Apocrypha. (Summary from Wikipedia and by David Shamp) For further information, including links to online text, reader information, RSS feeds, CD cover or other formats (if available), please go to the LibriVox catalog page for this recording. For more free audiobooks, or to become a volunteer reader, please visit librivox.org. Download M4B (13MB)

Uploaded by librivoxbooks on August 1, 2007